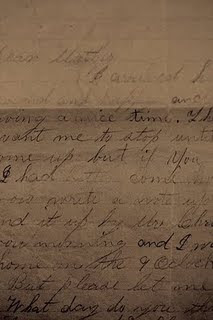 Correspondence is a lost art--

not the type it in and click send sort.

The kind that exacts a price

from gripping a well made pen.

Most everything is faster now than it was

when I was a kid. Back then, everything was

faster than it had been before.

I wonder at what point we’ll lose

our equilibrium; revert of necessity

to a less dizzying pace. Maybe then we’ll sit

down of our own accord on a summer evening

with a glass of actual fresh-squeezed lemonade;

write a letter to someone who remembers

less hectic times than we do.

for MJ & the Brats 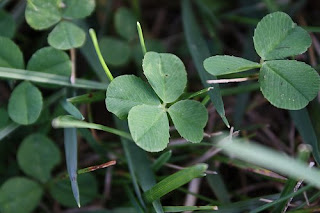 He could find a four leaf clover anywhere,

and he always did--even 14 years later in my yard,

a relative stranger now. He bent toward the ground,

worked his magic once more, and I remembered

blown across the globe wherever the Forces willed.

We flew with the wind and landed,

hoping this plot of land would be

as or more kindly than the last.

I think I might welcome a wasp or two--

they’re a sure sign summer has long yet to surrender--

standing at the bus stop on a chilly fall twilight.

If not for the knowledge that Winter is on his way,

the morning would be relatively unmarred.

The air isn’t cold enough to sting; to rob me

of the paintbrush trees and the flaming bushes...

inspired by The Weekend Wordsmith

I prefer a quilt to a flag--there’s room

than blood and honor, courage and fifty-one stars.

Ambivalence wreaks havoc on those lines--

the unrelenting contrast a written-in-red-and-white-

stone patriotism which makes it difficult to think

beyond black and white.

The quilt was made by my mother. I watched her

stitch the pieces together on a military base

on foreign soil, where soldiers had died.

So did we all, for the sake of a mission,

nevermind the casualties at home.

There’s a line, a point of indecision

beyond which it will cost dearly to go back,
lose weight, make right, arrive
at the intended destination. Too Late
is a myth, but one always hopes to turn
before interpreting the point of indecision
as the point of no return.

for a picket fence, but injustice doesn’t disappear

because I am safe. There are battles to be fought,

and I, being the soldier, cannot sit idle;

let this or that chauvinist think it’s ok for him

to leave the chivalry to you.

Someone tried to scam me through my Etsy shop today. I was uncomfortable from the first email, but couldn't figure out what the scam was. Here's the email:

I asked several times to what location I would be shipping my painting (MY PAINTING), and she responded each time that her "private shipping company" would pick it up. She said she would send an excess of funds so that I could pay the shipping company via Western Union.
I have to admit I'm a bit crestfallen. I do desire to sell my paintings. But it scares me to think that if these folks had been just a bit more sophisticated in their approach, I'd have lost a very meaningful painting, and I'd be more than $1000 in the hole.
Posted by Maria at 10:11 AM No comments:

17 October 2009
My eyes are open today. I see
how fruitless are the hours spent worrying
about a form and substance you adore.
These conversations never cease behind the eyes,
laughing or weeping. They never cease.
I hear the fretting accusations,
the whispers of starvation. I hear them,
but they grow quieter with time. Or perhaps
I build a wall inside my head, beyond which
their power diminishes--
I am, without fear, who I am.
Posted by Maria at 10:55 AM 1 comment:

8 October 2009
No one decided to titivate our walk
to the bus stop with a two-days-gone raccoon
and broken fluorescents. Nevertheless,
the flattening lump in the road
gave me a shiver-- unnecessary in today’s
decidedly crisper autumn chill.
Carelessness, really, perhaps a neglected brake-check,
lack of attention to detail on trash day,
and our daily trek was muddied with the detritus
of someone else’s poor judgement.
We did not choose to put the raccoon in the street,
nor the glass in the grass at the bus stop--
neither had we chosen to remove them.
Chastened, we took up the less offensive burden; hoped
someone else would own up to the raccoon.
Posted by Maria at 10:14 AM No comments:

7 October 2009
There’s a perfect arc of moistened concrete
beneath the storm door today, another autumnal whisper,
“summer is gone,” I’d not heard until this morning.
From now until May, possibly June,
the air on the world-side of that door will be cooler
than the air on the home-side.
The latter will rarely be warm enough, and the former
will only shed its moisture down the door for so long
before North Wind weaves of the water
her crystalline lacework over the glass;
hides the frosted grass from view.
Posted by Maria at 8:27 AM No comments:

6 October 2009
I picked four canvases,
though quantity has never been an object--
I always fill the empty spaces. I didn’t realize
there were two such, untouched, against a wall
at home, hiding behind neglected work
like the words I’ve tried to write of late.
I’ve waited too long, spoken too little--
there’s a perfect whiteness cluttering my mind.
I can’t find the component shards of possibility
until I’ve brought a new one home.
Posted by Maria at 7:24 AM No comments:

It's a word that well describes my sentiment as I sit down with my laptop to take up the task of writing again. I haven't written a single poem since mid-August, and before that it was mid-July. It's been so long since I've attempted to write everyday. There was a time when I couldn't help myself, and I lost sleep because there was so much to say.
I know there are at least as many beautiful things around me now as there were 3 years ago, when I wrote nearly constantly, sometimes driving down the road (usually I pulled over). Something about being, by and large, content seems to dull the edge of urgency--it's easier to put off sharing my mind when desperation is not licking at my heels.
I find, though, that when I don't write, over time, the things I would've said in the span of days or weeks back up in my mind, and I come to the point where there's too much to say and not enough words, or drafting-board space in my mind, to organize it and say it well.
This brings me to my word for the day: Reticent. I want to write. I want to share what I have to say, but I have no idea where to begin. So I'll begin with today. And maybe tomorrow will be easier.
reticent
5 October 2009
This season is fraught with dangers,
cliches I must attempt to navigate
over, around, beneath to find something
more meaningful than turning leaves,
pumpkins and hot, mulled wine.
I despair of avoiding the trip-up
and turn my face upward, breathe
the full, crisp air, wonder at the perfect
cut-outs against an o-dark-thirty sky
as I walk beneath a maple
reticent to change her green.
Posted by Maria at 9:47 AM No comments:

View my complete profile
Beauty of Ashes on Facebook