Just read a post [from 2003] on the subject on a site I visit fairly regularly. It was more than a relief to read the words of a man denouncing pornography without reservation. If you'd like to read it, click here.

Around this time last year, I was told about a certain brand of feminism which holds that pornography is empowering of women. Below is my response to that conversation.

Empowerment as subjugation,
one sex to another-
a familiar story with an eerie twist,
placing man beneath femininity;
making him less than
you; making you less than
you were before.

Progress as regress,
mocking evolution-
a 360 degree revolution,
now we’ve taken up
weapons both have wielded
for centuries,
reclaimed our bodies
by hurling them like hand grenades,
making Woman nothing
but body parts to lure; entice;
give some false sense of hope
that we control something
ultimately, outside of self.

And so we are violated twice-
once by men, then by ourselves.

The body of a woman holds much
power; has been misused in myriad ways-
illustrious, imaginative, ingenious-
impudent, insolent... ignorant.

You make the sacred an asylum;
beauty, ashes;
personhood a thing to wield;
womanhood, political fodder.

Empowerment becomes a straw-man,
and it matters not if you win the debate,

for the givers of life have sold
their birth-right
in order to sate their pride.
Posted by Maria at 9:23 AM 1 comment:

Harrodsburg Road is a long, dim drive
most mornings. Monotony sets in
long before I think to pay attention to the trees,
the horses, or even the expanse above them- dark
or bright, gay or filled with tears- a favorite subject,
and ubiquitous on days when misty-morning haze
knits landscape to muddy-gray of not quite cloudy,
not quite cloudless sky.

On one such day, the sun appeared-
amidst a sullied plain of muddled colorlessness
which I mistook as overcast- a neon disk of fire
dulled by the morning haze, impressive,
though not quite lovely; undeniable, though not
quite convicting, not quite high enough in its ascent
to beautify the heavy fog upon rolling hills;
valleys of blue-green.

The higher she rose, all the more golden seemed
the land before, behind, above; the more inspired
seemed the wisps of cloud, descended that morning,
as if they meant to kiss the Earth before ascending;
vanishing again.

As earth and wind and sky waxed in loveliness,
less and less could eye behold the beauty of the sun,
so brightly did she shine. Only for the radiance
released; bestowed upon the land did she shine out
all the more magnificent; find her glory in drawing eyes
toward something other than self, and so exceeded
all else in splendor.
Posted by Maria at 12:32 PM No comments:

What You Would Say

I pushed and grasped for things not mine
and foiled a good gift You might have given;
foiled the good gift You could still have given
even as I realized what I missed in my grasping.
Even the thing grasped might end in blessing
if I let it.

And now, thwarted in every plan and gift,
the blessing may yet fall,
if I let it-

so now, “after the ruin has fallen,”
I will stop and I will ask
what You have to say about who I am
and who I’ve been tonight,
and though the blessing may strike
thrice the more painful for my struggling against
the answer I’ve known all along I’d receive,
I will receive, and in the pain
Your blessing will fall
as I let it.
Posted by Maria at 1:30 AM No comments:

This gift can be a burden,
driven to encapsulate every movement
of grief, rage, despair, joy.
Pen runs dry, and so do I
tire of the attempt to convey
imperceptible shifts of mood,
light and shade- they play
perpetually upon the waters of mind,
broken not occasionally by fin
and ken which runs too deep
for words. I cannot stretch
far enough to find the place and time
wherein self knows and is known
perfectly- must be content
with a near-enough representation,
far from enough to sate desire.
Posted by Maria at 3:39 PM No comments:

So accustomed to an unchanging glimpse-
a painting, poem, book or song-
encapsulation, representation of a moment
in time, though not the moment itself-

it no longer exists.

The essence of time: Movement.
unending alteration,
occasionally imperceptible. Beauty indwells
the painting, poem, book and song
because it captures movement
of a unique and unrepeatable measure of time.

Love and long for it with hands, arms, heart
wide open to the possibility; probability
such will not last; is only held for being
set free to run its course; bring deep sadness;
joy inexpressible, a gift for salvation
if we let it.
Posted by Maria at 2:05 PM No comments: 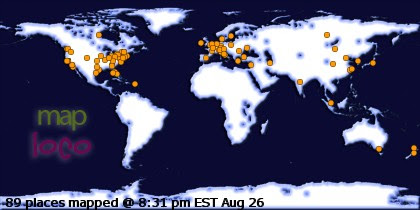